Hello again – after a month in Singapore where we caught up on some personal and business matters and even manged a trip to the gambler paradise of Genting Highlands, we are once again on the road. The second part of our year long trip will start with a five weeks adventure in the Philippines – a country both of us hadn’t been yet.

Lucky more (as Singaporeans would say) Helen, who works for Hazel’s family, came with us for the first ten days and so our first stop was her home town Oton – near Iloilo.

After an early three hours flight we were picked up by her brother at Iloilo international airport (one runway, three gates) and after a short Jeepney ride (the color full Filipino version of a mini bus) we arrived at her family’s home. We soon realized that Helen’s family is quite extensive and there were a lot of cousins, nieces and nephews from all age around. Everybody was super friendly and welcoming and we felt at home at once.

After an extended nap (the flight was at 3 AM after all) Hazel and Helen tried to maneuver the family’s tricycle (a motorbike with a side-wagon – another popular mean of transportation in the the Philippines) which was a great spectacle to watch.

Later on we visited the center of Oton where we had a look at the local market, the municipality building and also had our first Halo Halo (a colorful ice-cream with a variety of toppings). A nice dinner with her family ended our first day in the Philippines.

The next day started with a local breakfast where Kevin even tried a Bulot – the local Filipono egg which has a 17 day old chicken inside. Yummy – Hazel passed.

Afterwards we were on our way to Garin Farm together with Helen and some or her relatives. The farm is a mixture of a show farm, an amusement park and a pilgrimage. After having had a look at the farm animals and the replica of a typical farm house we took the four hundred plus steps up to the giant cross. Along the climb were various biblical stations from the Creation to the Devin Mercy. As it was getting really hot we were happy once we had reached the top. The nice view of the nearby sea and the refreshing breeze was a nice reward for the climb. Once down again we enjoyed a nice lunch with plenty of grilled meat. After we filled our stomachs we decided to do some exercise and rented two paddle boats – which were fun but a bit hard to steer.

On our way back we stopped at the Santo Tomas de Villanueva Church near Iloilo. This 1786 built church was once used as a fortress and is listed as an UNESCO World Heritage Side. Unfortunately the church itself was closed and so we were limited to take pictures from the outside.

Final stop was a fish farm where we tried our luck in catching our dinner. As a matter of fact we were actually quite successful and caught almost 4 kg of fish which were later bbqd at Helen’s place. On the way back we also set a new record on how many people you can fit on a tricycle – exactly ten. 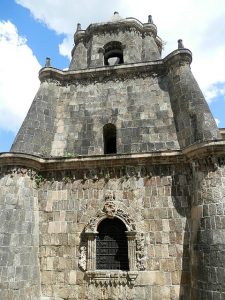 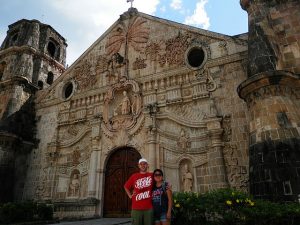 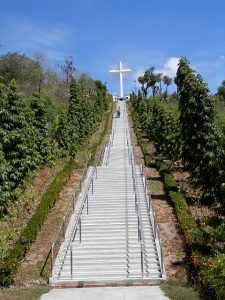 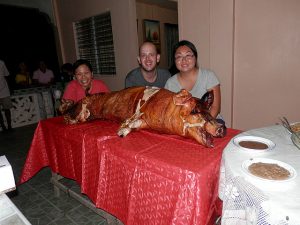 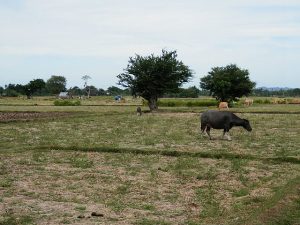 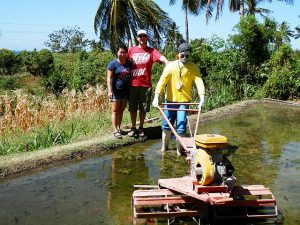 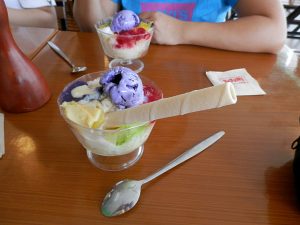 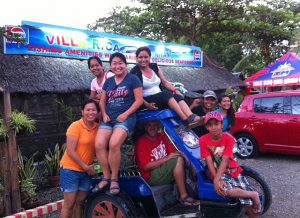 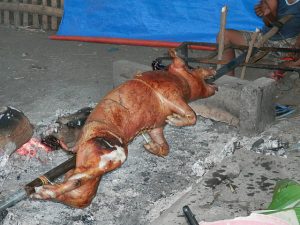 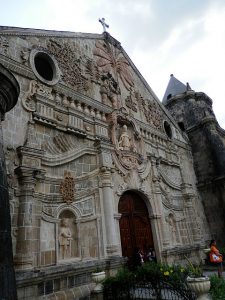 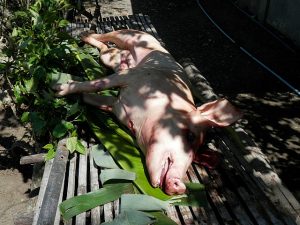 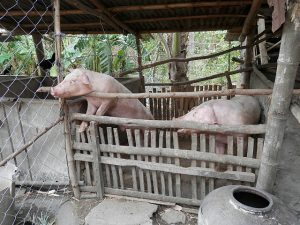 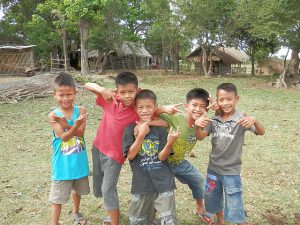 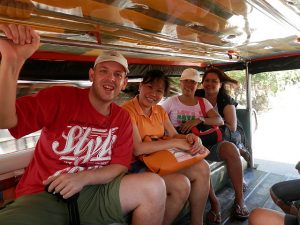 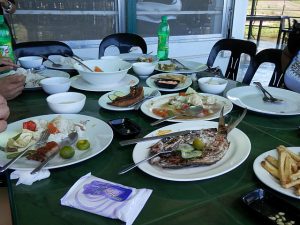 The next day had a lot of excitement as it was Helen’s mother’s birthday. In the morning we first went to Iloilo City for some shopping combined with lunch at Jolibee – which is the much better Filipino version of KFC.

Once we were back at the house a cock fight was in full force. This popular Filipino “sport” normally involves 2 cocks (aha), a lot of betting (in various amounts) and can be quite bloody (normally one cock dies). However we witnessed the non-lethal version where the two cocks fight for 90 minutes or till one of them “walks away”. Controversial sport nevertheless.

In the meantime a 70 kg pig which was slaughtered in the morning for the birthday fiesta and was ready to be roasted. It’s called Lechon and it’s nothing short of absolutely delicious – from the super crispy skin to the tender meat to the very tasty gravy containing the intestines.

However before we had dinner the mobile disco was already in full blast as Helen’s brother had two 4-meter high speakers and a sound/karaoke system. The younger kids new all the dance moves (must be from the youtube videos) and some of them were also quite good singers. For sure we joined them and showed some moves ourselves.

The dinner was a real feast with more than 50 relatives around and we felt once more the hospitality and generosity of the people and we were really blessed to be part of such a great fiesta!

After dinner the party went on with more dancing under the starts and some beers!

Korea here we are again