After the three hour crossing of the Cook Strait on the Interislander Ferry we arrived in Wellington where we were welcomed by Peter and Kathy, which we first met a few months earlier at a friend’s wedding in Switzerland. They invited us to be their guests for the next two nights and as always it was great to stay with locals. It just gives so much more insight into a country and its customs.

It was a nice, sunny afternoon and they showed us around Wellington and its coast line before heading up Mount Victoria for a 360 degree view of the city. New Zealand’s capital is really a three-dimensional city where the majority of buildings are built on the sloops of hills. In the evening our fantastic hosts cooked a great meal for us in their lovely home.

The next day was perfect for our plan to visit the Te Papa Museum – yes, you guessed it, it was raining. The Te Papa is an excellent museum in the center of Wellington. Besides some gigantic ogres from the Lord of the Rings, a whale skeleton, a gigantic squid the museum also had an excellent exhibition about immigration to New Zealand. It was impressive to see the hard ship a lot people were willing to accept while settling from overseas to New Zealand (such as leaving family and friends behind or a long and strenuous passage on the open sea). After about five hours we decided that we wanted to see a bit more of the city and took the cable car up to the Kelburn lookout from where we had a short stroll down through the Botanic Garden back to the city center.

The next morning it was time to say good-bye to our fantastic hosts. Thank you again! We continued our trip up north – first through a scenic but very winding country road and later on the more comfortable highway. Via Levin and Taihape we made our to Ohakune near Tongariro National Park. As we both were quite tired (we also didn’t know why) we spent the afternoon with a long nap and called it an early day.

The Tongariro National Park is famous for the 20 km Tongariro Crossing hike. However as the weather was rather average and the clouds were hanging very low we decided to give it a miss and opted for some shorter walks instead. The 3-hour walk to the Silica Rapids was indeed very nice and led first through some lush forest before crossing some barren land. Quite a different landscape. Later on, we stopped two more times to have a look at the Tawhai Falls and The Mounds (which were a series of small hills formed by volcanic activities).

We further stopped on our drive to Taupo at the DOC National Trout Center where we fed the fishes (very much to fish-obsesed Hazel’s liking). In charming Taupo we stayed at the All Season Holiday Park for two days as there was plenty to see in the region.

The next day was all about “water” and given that Lake Taupo is the biggest crater lake in the world there was plenty of it. First stop was at the Huka Falls at the edge of the town. These falls are really spectacular as water from the lake is making its way through a narrow passage before falling down the falls. The water was super clear and had a fantastic blue colour.

A few kilometer down the river was the Aratiatia Dam. The dam is opened every two hours or so to provide water for the water-plant. Have a look at the before and after picture to see the significant change in water level.

As you might know the centre of New Zealand’s North Island is a quite active thermal area. Mount Tongariro for example only had erupted a few months ago and so it is a common sight to see steam coming out from the ground. It also can become a bit stinky as the ground contains a lot of minerals such as sulfur. We got a first impression of all this at the Craters of the Moon – a series of small craters with a lot of hot steam (much to Kevin’s liking).

After that we headed to the Thermal Spa Park where two streams of very hot water met the river which offered some swimming opportunities. It was a bit hard to find a good spot as it was either too hot (like boiling hot) or freezing cold. It was a bit like the joke that if you put one of your legs into the fridge and the other one into the oven you are fine on average).

The next day we had an early start (or at least early for being on a holiday) as we wanted to see the eruption of Lady Knox Geyser. So together with another two hundred tourists we waited for the show to begin. It was a bit of a cheap trick as the ranger but a packet of washing powder into the Geyser to break the water tension and get it running (to the amazement of Hazel as she thought the Geyser has a natural 24 hour rhythm – which amused Kevin a good deal). The whole show was a bit like bad sex – long foreplay and a very short climax (as the Geyser only spilled out water for 30 seconds or so).

Afterwards we spent two hours in the nearby Wai-O-Tapu Volcanic Wonderland. It offered a wide array of craters with waters in different colours and lot of metal-coloured rocks and stones. Most impressive was the big, boiling and steaming champagne pool. As so often the pictures show more than words can describe.

Later on a short drive brought us to the Waikite Vally Hot Pools and Campgrounds where we would spend the night and indulged ourselves in the hot pools. So relaxing. 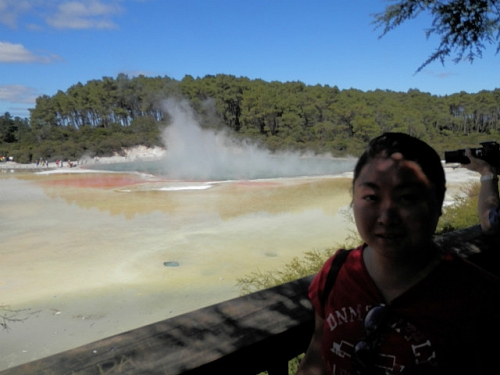 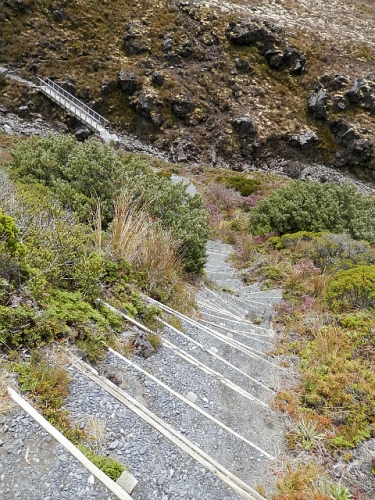 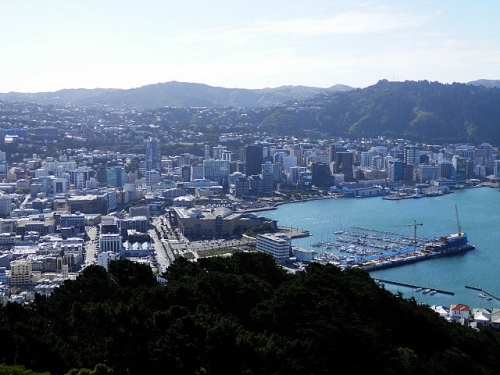 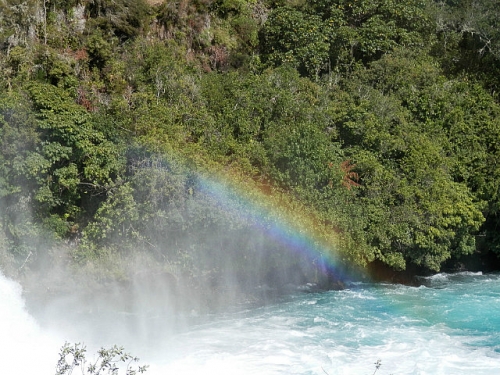 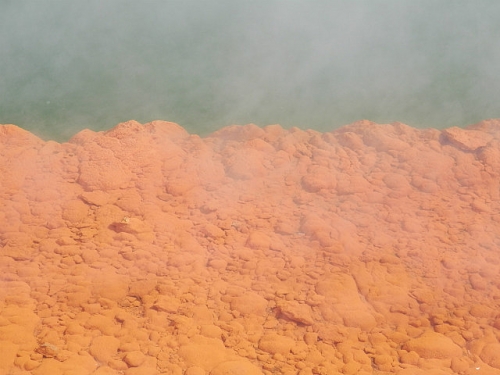 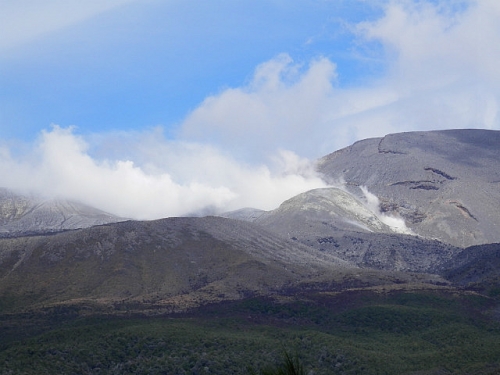 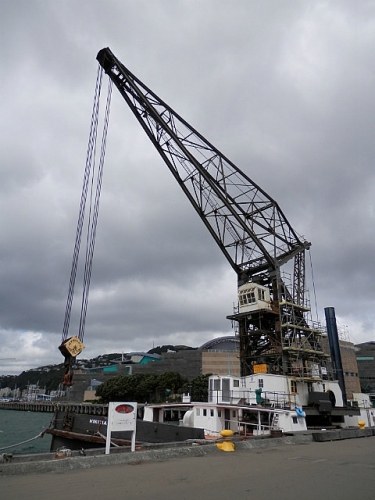 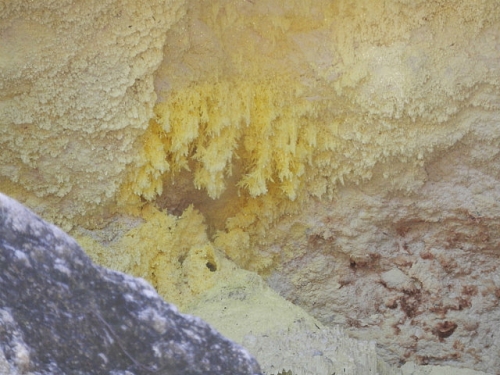 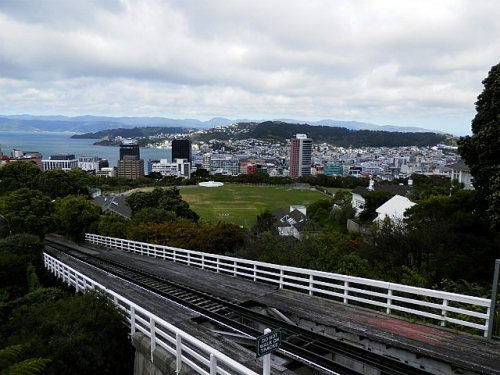 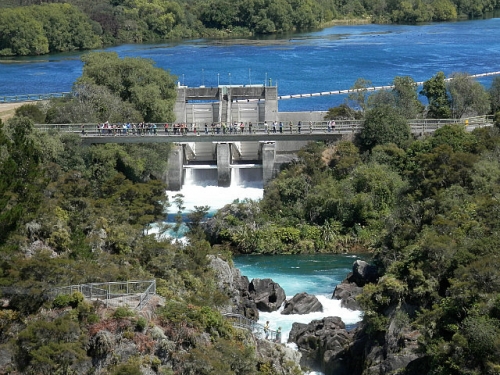 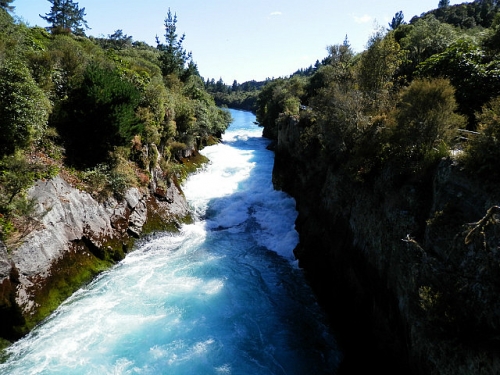 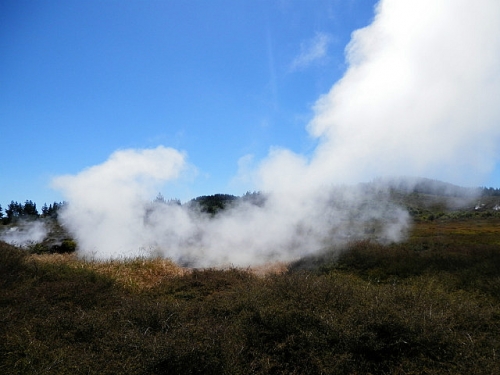 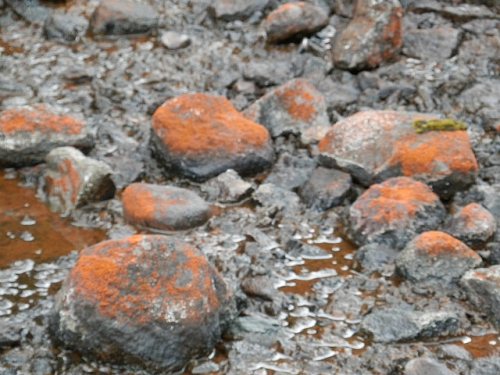 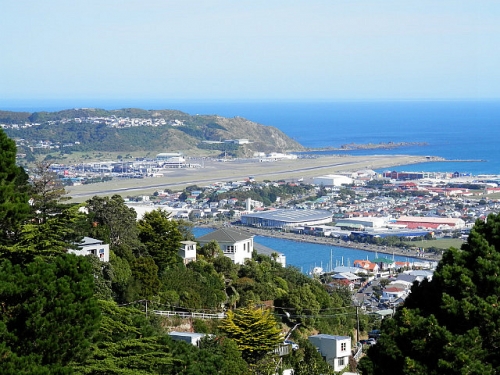 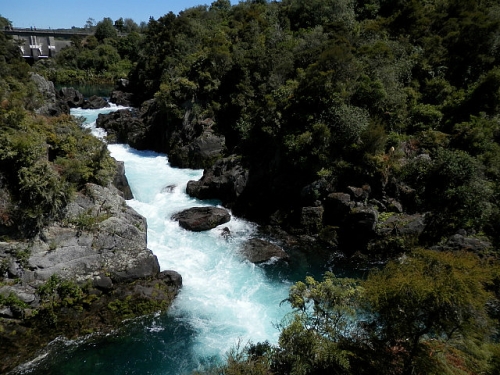 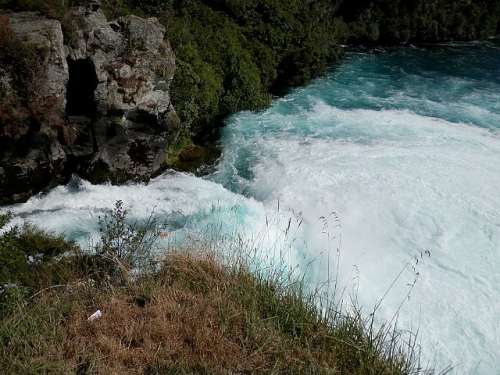 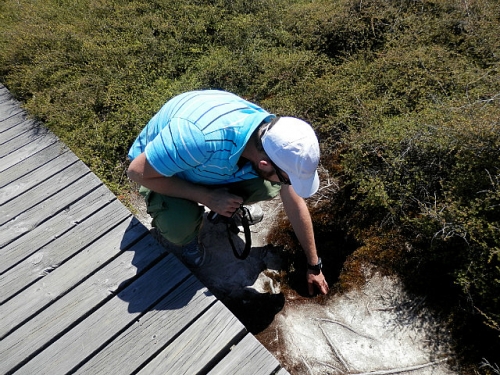 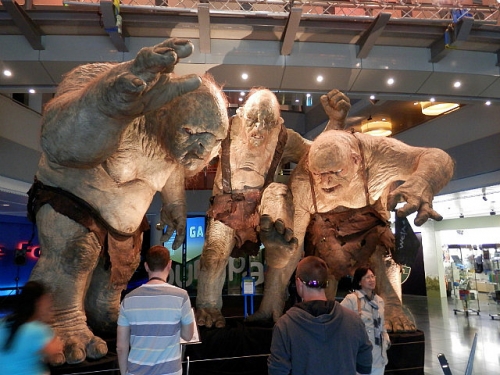 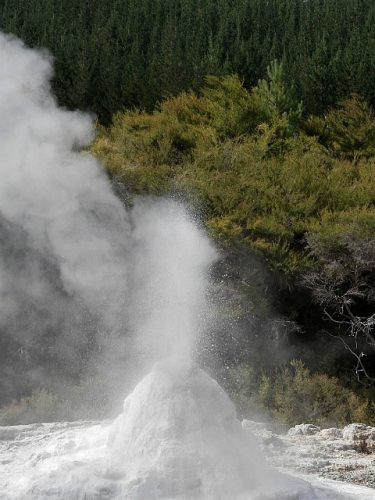 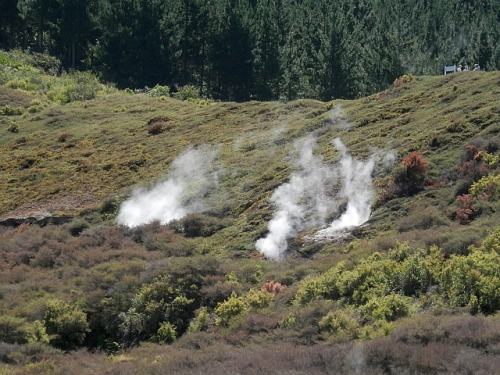 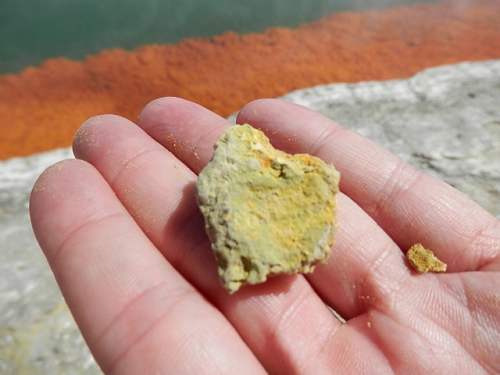 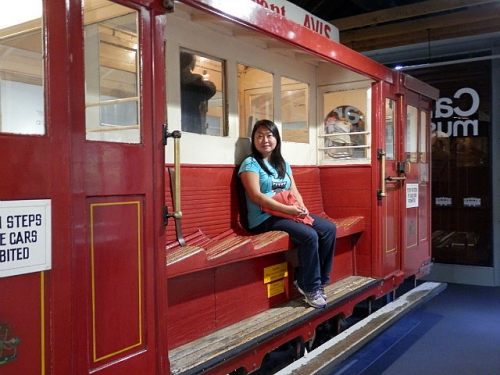 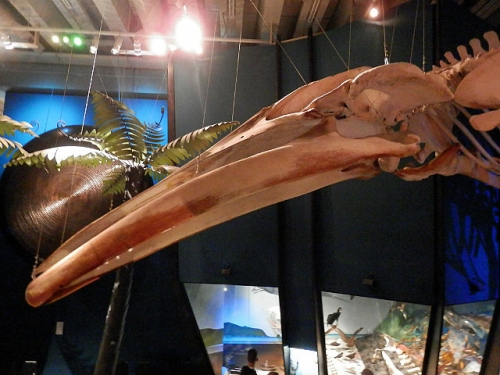 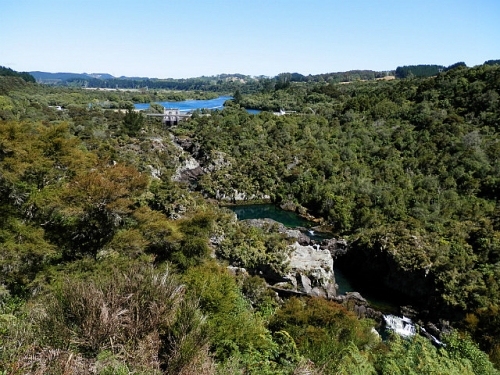 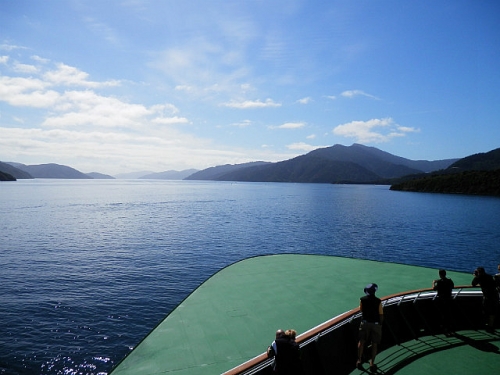 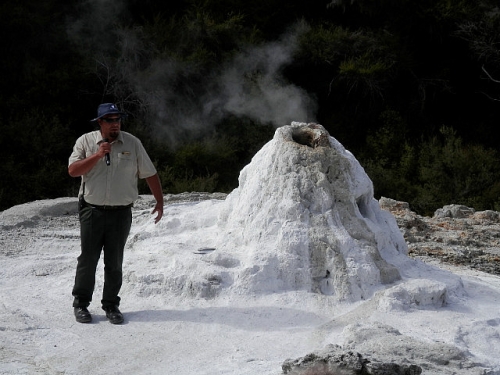 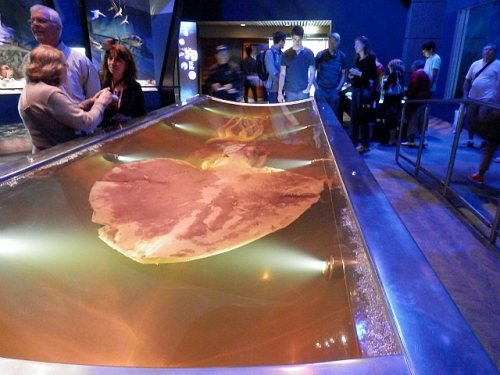 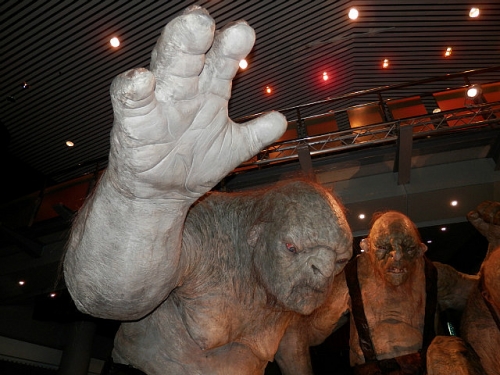 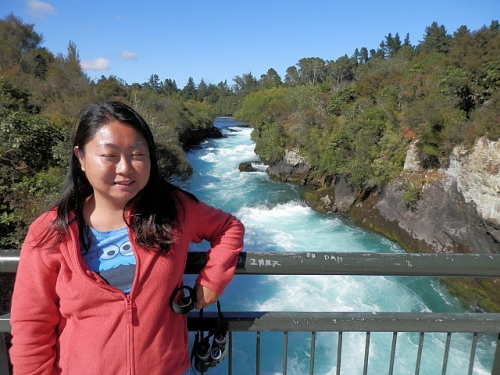 It’s Paradise up in Surfers Paradise